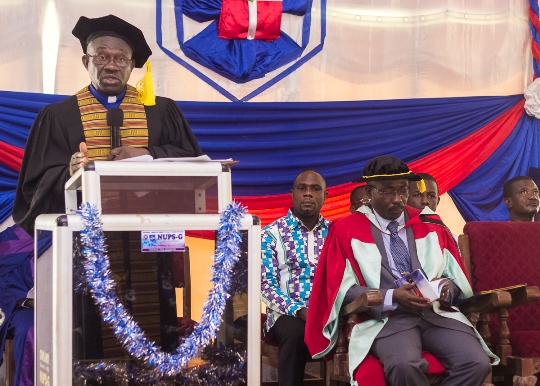 THEME:    THE POWER THAT RAISES THE DEAD

We bring you greetings from the Presbyterian University College, Ghana- a University established in 2003 by Presbyterian Church of Ghana. Academically, the University is doing well. It is with joy that we announce that one of our students was adjudged the overall Best Candidate in Registered General Nursing Licensure Examination (Written)-2015 by the Nursing and Midwifery Council of Ghana. All graduating students from all Departments of Nursing in the country’s universities, both public and private, write this national examination before being licensed. A student of PUCG, our student, Ms. Sandra E. Akpobome made distinction in 6 of the courses examined-Medicine and Medical Nursing, Mental Health/Psychiatric Nursing, Obstetric Nursing, Paediatric Nursing, Public Health Nursing, and Surgery and Surgical Nursing. On 1st June 2016 she was given an award by the Nursing and Midwifery Council for this sterling performance. PUCG students have been performing exceptionally well in such national examinations and competitions. In the examinations, PUCG students have been scoring a 100% in most cases and winning the first position in competitions too. The university is open for admissions for 2016/2017 academic year. If you want a head start in life for your wards and children, then your choice should be PUCG.

Today is the 3rd Sunday after Pentecost. We have met here to worship God-praise, adore, and delight ourselves in the presence of our living God. Specifically it is to participate in and witness the commissioning and licensing of nineteen (19) ministerial Probationers.

The theme for today’s sermon is The Power that Raises the Dead.

I want to congratulate the probationers. I know that it has been an uphill task to get to where you are today. It is evident from your faces that all of you are fired up with the zeal for God’s work, ready to go and tear down and scatter the devil’s works.

Reading through the short write up on each one of you, it is clear that you are from different backgrounds with different experiences and of different ages. The question is: why did you decide to come into the ministry in the first place? A job / Respect /Fame/ Power/ No. You are coming into the Ministry, because each one of you strongly believes that you have felt the call of God on your lives to preach the Word and bring glory to His name. For some of you the experience of the call may have been intense, others no so. Some of you may have responded to the call immediately, others not as promptly as they should. Whether you are now joining the ministry, or you have been in the ministry for one year, five years, ten years, twenty years, or fifty, it is the same Living God, Jehovah, Yahweh who has called you into his ministry. The prophet Isaiah in describing his commissioning opened our eyes to a heavenly scene that showed the Majesty, Splendor, Excellence, and Awesome Power of God {Isaiah 6: 1-9}. The Awesome God who called Isaiah is the same God who created the heavens and the earth, and called Moses. It is the same God who led the Israelites through the wilderness, called Elijah,  Jeremiah, and all the prophets and Apostles, it’s the same God who has called you and all of us, both lay and clergy into his service. Praise to his name.

We have ample evidence in scripture and our lives, to convince us of the power of the Holy Spirit, but let me draw from today’s readings.

It is into such desperate situations that our Lord Jesus Christ speaks and restores life and hope. Through Jesus’ intervention, shattered hopes are restored, stability assured, and  shattered dreams for the future are restored.  What was lost was found.

Whatever is dead in our lives, in our relationships, in our worship, in our economic life can be restored to life through the power of Jesus; the power that raises the dead. Jesus can make a difference in the desperate situation in our lives and make us live again.

People are living in situations in this country that are choking the very life out of their bodies. There is high level of indiscipline and insecurity in our Churches and societies taking a heavy toll on every aspect of our lives. There is a widening gap between the rich and the poor. We have an economy, which is putting financial strain on the citizenry, a growing army of unemployed youth who have no hope in a bright future, a devouring government bureaucracy that keeps emptying the public treasury, affluent life style of the rich and powerful. These are stark realities of life. We need the power of the Holy Spirit to break out of these desperate situations. We need Jesus to give us life just as it happened to the sons of the widow of Nain and  widow of Zarephath.  My dear Probationers, you are coming into the ministry at very difficult times. I pray for a double portion of the Holy Spirit to enable you make a difference in people’s lives. You are not immune to these situations. You will experience them too, even more in the church, from parishioners and colleague ministers. You need to dig in, firmly rooted in the power of the Holy Spirit to fulfill your calling. Halleluiah.

What kind of leadership do we offer at our congregational levels, Districts, Presbyteries, place of work, homes, and national levels? Is it a leadership of rancor, divisiveness, self-preservation, or intolerance? Then it is not of the Spirit. What kind of leadership are you Probationers going to offer at your new postings? Are you going to Papa and Mama over everybody? I pray that you are filled with the Holy Spirit so that you can be effective leaders and contribute to building God’s kingdom.

The compassion of God does not allow God to passively stand still in the face of death and suffering. So Jesus went the extra mile, Jesus violated Jewish purity laws and gave life. He touched death and transformed it into life. Alleluia. May he touch what is dead in your life and transform it into life.

This compassion of God should be an example for leaders and all of us who have the power of the Holy Spirit. We must be compassionate. The Jewish Philosopher Philo of Alexandria said one should “be kind for everyone you meet is fighting a great battle” One may be breathing but still be dead. One may attend church, but still be dead. We need compassionate people and leaders as demonstrated by our Lord Jesus Christ and the power of the Holy Spirit. Very soon, this country will have another opportunity to choose her leaders. Christians are praying fervently for peaceful elections and competent leaders. Let us remember that God will not send angels to come and vote on our behalf. We have to queue and vote ourselves. I pray that we vote as the Spirit gives us direction and not as money directs; for compassionate leaders who will listen and do the promptings of the Holy Spirit. Probationers, Agents, lay leaders, and all of us have a role to play in educating our people on the promptings and guidance of the Holy Spirit. We have to show compassion, through companionship, sharing, and prayer.